Well folks,
It was bound to happen with all the money the first film made,now i wasn't a fan of the first film,the hype machine killed it for me as i know it did for a lot of people but saying that you know we will all watch the 2nd one anyway!
so here's the just released trailer for"Paranormal Ativity 2"
Enjoy!
Jonny t

Posted by Jonnyscultfilms at 22:41 No comments:

"The Man in the maze"is coming for you!

Hello all,
Check out this preview/press release for "The man in the maze"from director Mitesh kumar patel,looks pretty cool,go visit the website and check out updates/facebook group, http://www.facebook.com/pages/The-Man-in-the-Maze-Movie/275214654765
I am sure we will all support and wish Mitesh all the very best of luck.
can't wait to see it!!
take it easy.
jonny t. 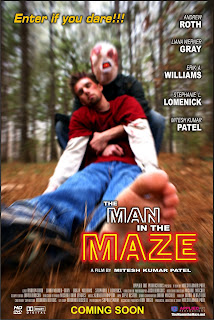 FOR IMMEDIATE RELEASE: JUNE 2010
The Man in the Maze has obtained distribution agreements in the U.S. with R-Squared Films
and Mowgli Productions in India
FLORENCE, AL, USA - Mitesh Kumar Patel's film "The Man in the Maze" now in post-production
with limited theatrical release dates scheduled for September 2010 in the U.S. and December 2010 in
India.
"The Man in the Maze" now in post-production, has obtained distribution in the U.S. through
R-Squared Films and in India the film will be distributed by Mowgli Productions. Limited theatrical
release dates are scheduled for September 2010 by R-Squared Films and December 2010 by Mowgli
Productions. Patel, whose production company is Applied Art Productions, began post production in
April. He is producer, director and story writer for the film.
"The Man in the Maze" centers around four college students on a field trip to learn more about the
American Indian Trail of Tears. While traipsing through the woods, however, they stumble upon an
Indian burial mound that marks the burial site of a Native American family that died on the trail. The
mound was cursed by a distraught family member, and whoever disturbs it unleashes trouble and winds
up lost in a maze, terrorized by an unknown force.
"It's pretty smart," according to Mr. Patel, "I think a lot of viewers are going to get lost the first time
through, and they'll have to watch it again to pick out all the details. It's delivered in such a way that it
takes you a while to figure it out."
For more information please visit www.themaninthemaze.net 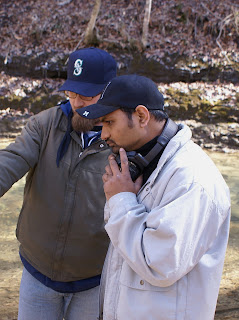 Posted by Jonnyscultfilms at 04:59 3 comments: 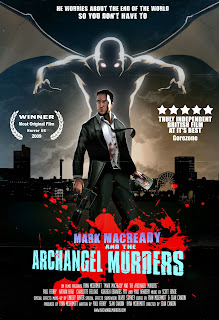 Hello all,
exciting news regarding the excellent looking uk horror flick"Mark Macready and The Archangel Murders"below is a press release including the poster and 4 new images, This uk horror film is now creating a huge buzz worldwide and this is the best part,its free online on june 19th,so if your a horror fan you cannot miss out on this awesome flick!!definately 2 thumbbs up,take a look,
thanks,
jonny t!

'Mark Macready and the Archangel Murders' is the horror comedy short film that has taken the world by storm since its release in June 2009.

Over the past twelve months the film has screened across the UK and US film festivals, winning the award for 'Most Original Film' at the prestigious Horror UK Film Festival and receiving both audience and critical acclaim. Gorezone the world’s biggest selling horror magazine hailed the film as 'Truly independent British film at its best' and gave the film five stars.

After twelve hugely successful months screening for audiences across the world the film is now set to reach its biggest audience yet as it debuts online for free at the official website (www.archangelmurders.com) on June 19th. With a huge amount of forever growing online interest from avid fans on Twitter and Facebook the film is set to find a new lease of life online.

To celebrate the release of the short film online an Interactive VIP Launch Party is being held in Manchester, the first of its kind for an independent film. 100 guests have already won a place to attend the Launch Party being held at Base Bar Cafe in the heart of Manchester on June 19th. For those who weren't able to win entry the entire event will be streamed live via the official website and hosted by local radio DJ Adam Brown. Viewers to the live stream will be able to watch the film for free and then pose questions about the production to the films cast & crew in what is set to be a revolution for interactive filmmaking.

The film was shot on the back streets of Manchester in early 2009 with an independent budget of £5,000 raised solely by the filmmakers selling their worldly possessions on eBay after the film failed to receive industry funding. Since its humble beginnings the film has screened across the globe from New York to Canada and most recently at the Cannes International Film Festival Short Film Corner where it proved a huge hit with audiences.

Written, produced and directed by Paul Feeney, Ryan McDermott and Sean Candon, three friends who met at college in 2002 where the concept for the project was conceived by writer creator Paul Feeney. It was several years later when the idea resurfaced and was developed into the now award winning short film which brought together unidentified talent across Manchester.

The film is set in Manchester ‘The supernatural crime hub of the 21st century’ and is home to the officers of the G.M.P.I.D (Greater Manchester Paranormal Investigations Department) it is their job to fight the forces of evil that plague the city. Amongst these fine officers is hero cop Mark ‘Mac’ Macready. When Macready’s wife is kidnapped by a creature known as ‘The Archangel’ it’s a race against time for Macready to find his missing wife, solve the case and bring the merciless Archangel to cold blooded justice. 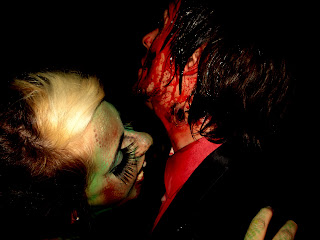 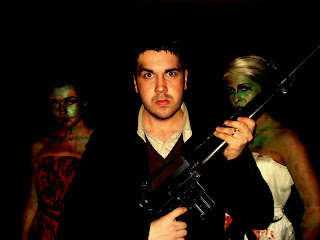 ‘Mark Macready and the Archangel Murders’ has exceed all expectations and as a result there is a massive demand for more content. An animated website series is currently in production and a feature film version is now in development with production scheduled to start in early 2011.

‘If you do not love this film, I question your horror fan credentials’ – Arrow in the Head

‘Here’s my official endorsement: Get your ass in gear and make a sequel’ - Brutal as Hell

‘Top quality stuff that left the audience in stitches’ – BritFilms 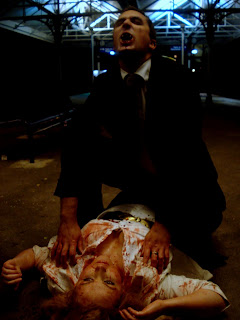 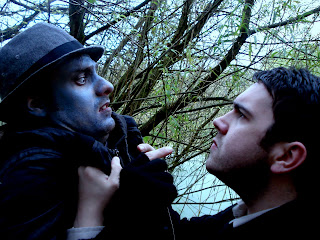 Hello good people,
Trailer saturday is here again.
This week The trailers are:

2-The Runaways-The story of joan jetts awesome band,This ones for Bob Tarbuck!!

3-Rosemarys Killer-A classic slasher i have just picked up for £1!!!!


Enjoy the trailers and your weekend,
jonny t!
Posted by Jonnyscultfilms at 01:15 No comments: