Hello People,
Here is part 4 in the continuation of every film i have seen this year,as stated in previous post the thoughts on these are mine and often not what you may think but hope you enjoy!
Jonny T.


Calvaire
Very odd European movie described as a cross between Texas chainsaw massacre and Deliverance,Brutal and very bizarre, worth a watch, I've not attached the trailer for this one but a scene from the movie that says it all!!
7/10
Cold Prey

Pretty good and well made Norwegian slasher from 2006, Good gore and great cinematography, it Sticks firmly the slasher formula and if that's your thing its a definite recommend,now with parts 2 and 3 released looks like a pretty solid trilogy.
7/10

Incredible Japanese film from 2010, a tale of revenge with twists around every corner, breathtaking imagery and film making you will NOT see in Hollywood, one of the best films i have seen this year.
9/10.

It takes all kinds of critters to make Farmer Vincent's fritters! A brilliant horror/comedy from 1980 about farmer Vincent and his special meats, it also has a chainsaw attack whilst wearing a pigs head, never seen it? Go seek it out now!
8/10

Also known as Horror on Snape island, This classic British film from 1972 is up there with my favourites, Gore from the get go. nudity and psychedelic images, as i said a classic!
8/10

Brotherhood of the wolf.

French Werewolf film from 2001, Now i may upset a few people when i say this but i really could not get into this one i just found it way to long and i thought it was style over substance but hey what do i now!!
5/10

So there you go, just a few more of the films I've seen so far, part 5 coming soon!
Thanks for taking the time to view,
Jonny T.
﻿
Posted by Jonnyscultfilms at 11:59 No comments: 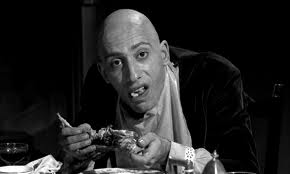 ﻿
Hello All,
Well we all know that it's a FACT that bald men are the sexiest on the planet right? So i was having a conversation with my fellow bald horror podcasting brother Mike at cadaverlab and over there they did a show on Horror Hotties and i thought what about the poor old downtrodden bladies in horror/cult films,there are some legends out there wether it be actors or characters.
So here is my personal pick of 3 of my all time favourite baldie actors,
Thanks,
Jonny(baldie) T! 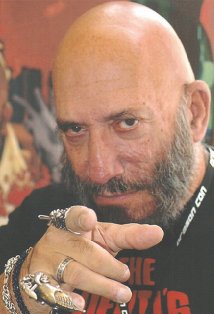 Well where can i start with the bald legend that is Sid Haig,Born in California 1939, He has starred in many many classic cult films such as Spider baby,THX 1138,The big doll house,The big bird cage,Coffy,Foxy brown and as the classic Captain Spaulding in House of a 1000 corpses,as well as appearing in countless TV series such as Batman,The six million dollar man,The A Team and T.J Hooker and his latest project is called ZOMBEX  which comes out this year on Halloween and tells the story of post Katrina hurricane hit New Orleans and the start of a zombie Apocalypse,bring it on!A true hard working bald legend indeed.
Donald Pleasence.﻿ 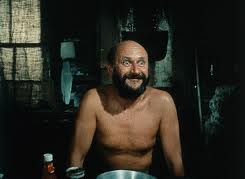 The good old Donald Pleasence! A true legend in the follically challenged bracket, Born in 1919 in my own town of Nottingham England, He starred as we know in 4 out of the 5 Halloween films as was superb in every one, He sadly passed away in 1995 the same year that one of his final roles as Dr Sam Loomis in Halloween 5, During the war he served with RAF and was shot down and held in a POW camp of which he made it through and went on to become a great British actor going on to star in such great films as Deathline(1973) Mutations(1974) The Uncanny(1977) The monster Club(1981) and Dario Argentos weird but wonderful Phenomena(1985) a truly great baldie. 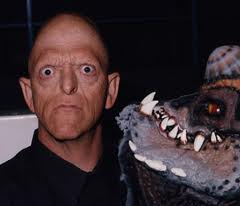 Some could say he's a little odd looking,yep i agree but that's made him the legend he his! Born in L.A. in 1948, Star of such great movies as The hills have eyes(1977) and The hills have eyes 2(1985)as the great character Pluto,Cut and run(1985),Deadling blessing(1981) another collaboration with Wes Craven,The Mutant biker in the cult classic Weird science as well as playing a mental patient not once but twice in One flew over the cuckoos nest and The fifth floor also in The Devils rejects and his latest project out later this year called Closed casket as Mort the mortician, i also read that he was in The Crow but his scenes were deleted.
I was very fortunate to meet him a few years back at a convention and i must say on that day he was the nicest person i met out of a ton of so called celebrities, happy to sign anything and talk with you for ages, a super nice top bald legend!!
Posted by Jonnyscultfilms at 04:50 4 comments:

Bloody Nora! She finally got round to it!
(Aka, Emmas Blues Harp review for her Miike Marathon)
Ok, so, if you read my intro to The Miike Marathon you may remember me saying this would be a weekly(ish) thing. I think its safe to say, I lied!If you didn't, I've got away with it, won't be mentioning it again. Anyway, let's crack on.
I mentioned in the MM (Miike Marathon) intro that I've seen a few of his films before, Audition (2000), Ichi(2001), you know, basically the same Miikes that everyone has seen.
Blues Harp is the first of his films I've watched without knowing anything about it first, no reviews, no trailers. There was no particular reason I chose this film, it was just the first one to arrive on the doormat!
I've stuck the trailer in below if you want to take a sneaky peak.

Blues Harp(1997) is one of a number of yukuza films Miike has directed, his most famous being the Dead or Alive trilogy, and probably the most "normal" of his pics I have seen up to now. Its all a little more subtle and straight forward than his more shocking work but you still get the familiar themes of loneliness and violence, of people living outside of mainstream society.
The main protagonists in the film are Kenji, played by Seiichi Tanabe (Ringu 0:Basude) and Chuji, played by Hiroyuki Ikeuchi, recently seen as a rather nasty Japanese solder in Ip Man
(with Donnie Yen as well you know, my martial arts education is coming along nicely!)
I'm Sorry, what was that?

Bloody hell people, what's wrong with you, go watch now!!!
I bet you a tenner you'll be practicing THE punch before the film is out.....
anyway, I digress!
(I have stuck the trailer below though, just incase)
So, back to Blues Harp.
Chuji is a bartender and part time drug dealer for a gang who also plays
harmonica (a blues harp) and Kenji (Seiichi Tanabe), a yukuza in an opposing gang. The pair become friends when Chuji helps Kenji escape from some rival gangsters. From here on, the general gist of the story is that Kenji is trying to advance his career in the gang by sleeping with his bosses wife, with the aim of changing his will, bumping him off and taking his place. All pretty straight forward until you throw in the fact that Kenji is gay, a fact he has to keep hidden due to his position in yukuza society, he develops a crush on Chuji, who is not. He meets his girlfriend early on in the film when she helps stitch Kenji up after the incident at the bar where he works.
Kenjis sexuality is never openly discussed as only one other character discovers his secret during the course of the film. We are shown it in glimpses early on, a lingering look at Chujis naked body while he sleeps and a scene where he's in the shower after having some loving with his bosses wife and he's scrubbing ferociously to try to cleanse himself of the experience.
As for Chuji, when the singer from the band who perform at the bar sees him play his blues harp, he encourages him to get up on stage and play. It goes down a storm and leads to the possibility of him being signed and escaping from his life dealing drugs.
Of the supporting characters, Chujis girlfriend adds a bit of stability and normality to his life. When they move in together and she becomes pregnant, it gives us the tiniest bit of hope that things may turn out ok for him. I especially like Kenjis (auto correct makes that penis!) number two, Kaneko, who takes the brunt of Kenjis anger and frustration with his situation. He also has a crush on Kenji and becomes increasingly jealous of his friendship with Chuji. His actions due to his jealousy are instrumental in the final outcome of the film, which I'm obviously not going to tell you!
The opening scene of the film is Chuji as a young child, his mothers a whore with no interest in him, his father's an African-American serviceman turned homeless drunk. We see him sat outside playing his harmonica while she gets down to business.
We then skip to a montage of scenes from throughout the film set to music which is being performed in the bar Chuji works in. I love this bit, it's bloody fantastic!
As soon as I saw this, I knew I was going to enjoy the rest of this film.
The tunes may feel a little out dated now but it gives the film an energy and
excitement that make you want to keep watching. Saying that though, i don't feel this film is style over substance. It's a more character based storyline than a lot of films from this genre, and I think Miikes focus on these characters and how there backgrounds have forced them onto the fringes of society, is what gives it the edge over others I've seen.
(Oh, and of course, it's yakuza and Miike so you get a smidgen of violence too.)

Because of all of the underlying tensions in this film, and the way Miike deals with them, it elevates it to more than just your bog standard yakuza film. I gave a damn about what was going to happen to the characters, even though you get that feeling of impending doom from the get go. This film is a great example of the genre and far surpasses a lot of the cobblers that's out there.
Go on, Give it a go!
So, there we go, Emmas "slightly" late waffle about Blues Harp. Thanks for
reading and, if you do see the film I hope you enjoy as much as I did.
As for the next review, I have no bloody idea, but I'll try not to take as long this time!
Take care x
Posted by Jonnyscultfilms at 04:14 No comments: