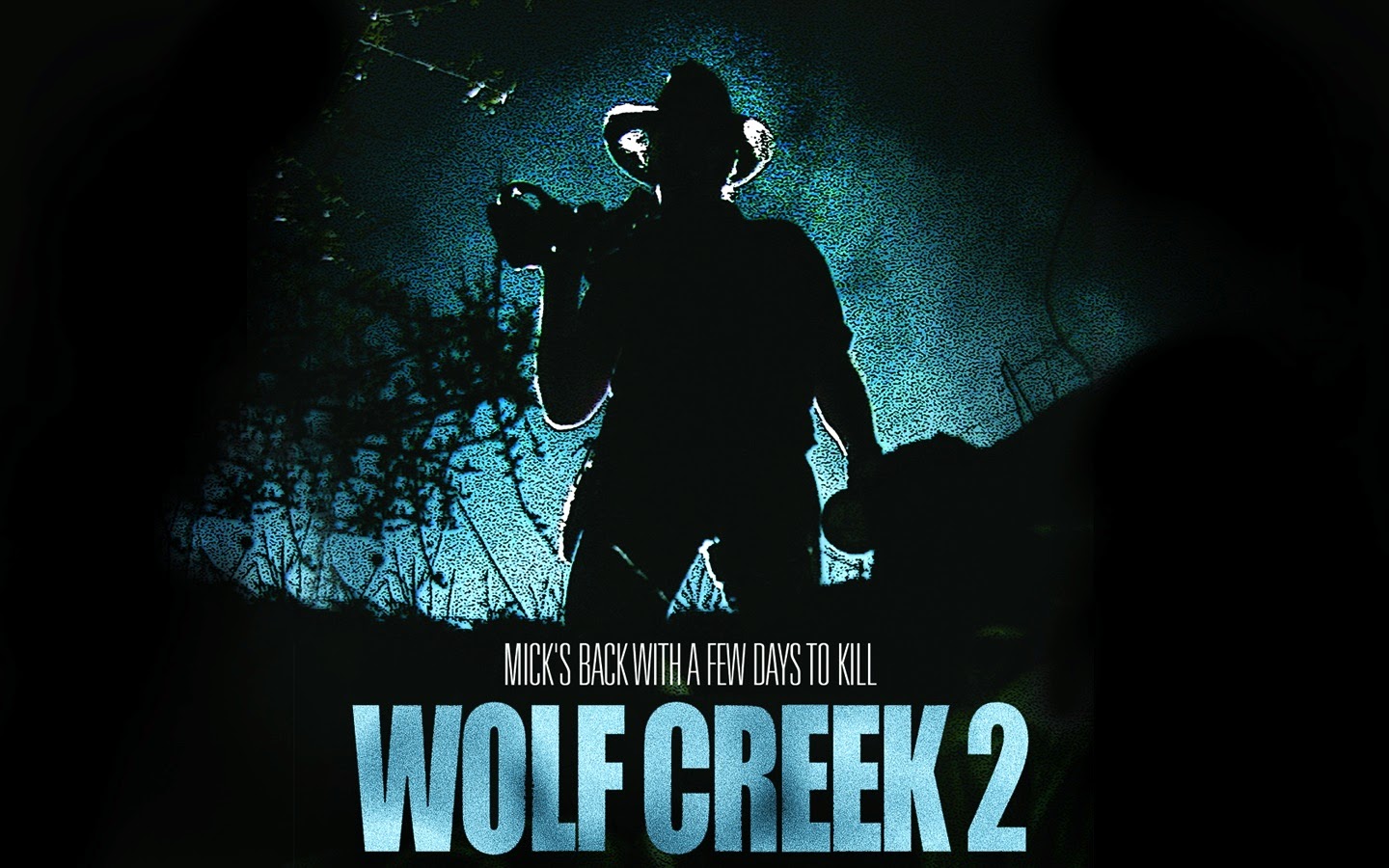 So the Mythical Mick Taylor is back, As with the 1st Wolf Creek this is base upon another true story of missing backpackers.And this time the gore factor is significantly cranked up .
The film opens with two extremely bored looking traffic cops in the vast outback just waiting for something to happen, Along comes good old Mick in his trusty pick up truck, They clock him going past at 97 kmph and hour and say to each other that he is just under the limit of 100 kmph but he doesn't know that so they decide to pull him over,Bad move. We see him pull his huge Crocodile Dundee style knife and place it on the passenger seat. He then exits the vehicle as asked, Told his was doing over 100 and issued with a ticket and told basically to fuck off and never come down this road again. They drive off laughing and calling him a fucking redneck,We then see in his van his hunting rifle with his sniper scope, Needless to say it doesn't end well for the policemen.
The story then focuses on a German couple backpacking their way across Australia, Waking down the road they think there luck has changed in the form of a lift but yes you've guessed it it's Mick in his truck, Lucky escape for them this time though as another truck comes along and scares Mick away, But he hasn't forgot about them. They then hitch a ride of an old lady and her sheep and are dropped of unfortunately for them at Wolf Creek. Then follows a few scenes of them skinny dipping Etc. And trying to in vain to get a lift back into town, The nights drawing in so they decide to camp in the National Park, Later that night they hear outside somebody pulling up outside the tent with headlights trained directly on the entrance, Guess who it is, yes it's Mick! 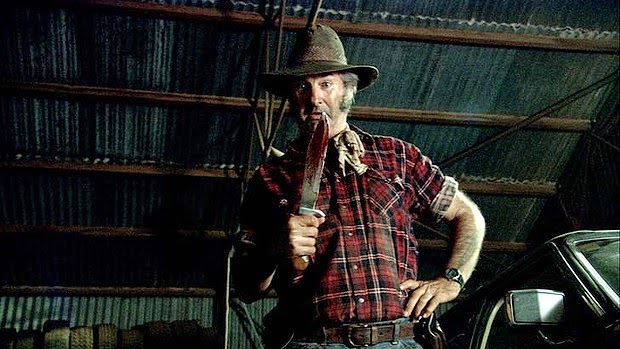 He tells them that they are breaking the law by camping and even more  trouble for them would be if a ranger found them and saw that they had started a fire, Being the kind hearted man Mick is he offers them a lift to the nearest town, The German chap obviously senses that something isn't quite right and tells his girlfriend to call the police at which point Mick flips and all hell breaks loose, He gets the guy up against the truck and rams his huge knife into his back leaving him for dead, His sights are now firmly set on the girl who he says that they will spend a good few months together.
Then he girl escapes and fortunately for her is picked up by a young English tourist who tries to work out what the hell is happening when in his rear view mirror appears psycho Mick heading for them at great speed and that's only about the 1st half hour!
I shan't go on with much more of the story as if you have yet to see it it will spoil it but i do have to say i did really enjoy Wolf Creek 2 probably even more than the 1st film.Whereas the 1st movie was pretty much another entry in to the so called "Torture Porn" Genre this one whether it was because the budget was bigger stays pretty much away from that label.
Mick Taylor yet again proves that he is a complete psycho and as i said the gore is pretty graphic and brilliantly done this time around. The Humor from Mick is as sick and as twisted as anything that Freddy Kruger came up with, so all in all one of the better horror movies of the year so far in my opinion, Give it a go it's safer than going backpacking in OZ!
7.5/10
Jonny T.

Posted by Jonnyscultfilms at 20:11 No comments:

The Strain - Love it? Hate it? Middle of the road it? 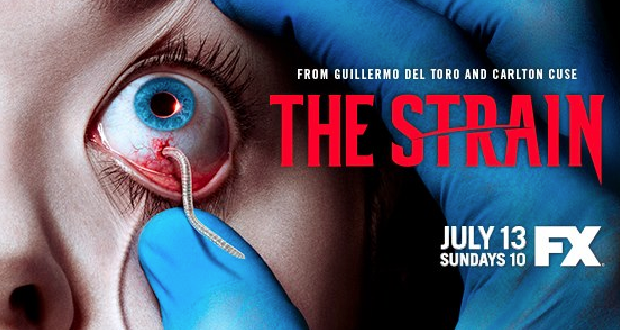 The Strain has finally made in to a TV show and now with high flying ratings and 5 episodes in but is it any good?
Well i do have to say for me after  a slightly in places dodgy season opener and now having  just watched episode 5 i am loving the shit out of it! I've read the 1st book and it does stick pretty faithful to that, If you not sure what it's about it's Vampires, Not your sparkly Twilight bollocks or even your classic Hammer Vamps but more in the mold of the 30 days of night type vampire with a little bit of Alien thrown in for good measure(watch it and you'll see what mean).
Its difficult to pull off when it comes to Vampires and the basis of the story is not that original, Lots of Dracula and Salem's Lot undertones in the 1st episode involves a plane landing then all communications are lost, No transmissions from the darkened plane on the runway, No communications from any of the cabin crew or passengers. Fearing  a chemical attack the authorities board the plane only to find everyone on board is dead. But there is something lurking in the luggage hold, something in a huge box that looks only to contain soil, or does it? So you can see the whole mysterious box contain soil scenario thing again but some of the twists and events that occur are great so i do think that FX have another hit show on their hands. 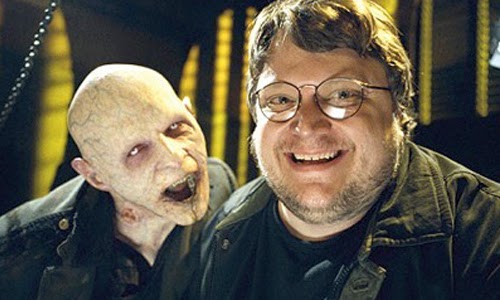 Our main character is Dr Ephraim Goodweather (Corey Stoll) Troubled by on ongoing divorce case and trying to keep appointments to see his child that he keeps missing due to work, he's a troubled soul but not as troubled as when he actually finds out whats going on, So you have him, Also a  rock star that to be honest is very goth and very Cliche and was really annoying me up until the last couple of episodes when his character takes a rather good twist, The Dr's sidekick who wants to help until she finds out something...... , The Rat-catcher guy is great also. So you have your mix of standard types as well as a vampire hunter very much as seen in old Hammer Movies.
It has to be said that the gore is turned up to 10, No holds barred on that score. But as i said it's only 5 episodes in so i for one hope it stays on course to the great original source material and doesn't drift off like The Walking Dead has or even god forbid end up like Dexter, Jesus that last season was rough!
So in summing up i'd watch at least 2 or maybe 3 then if you don't like it by then you probably won't. Not the best or most original TV show I've ever seen but it's certainly more than a satisfying filler until the return of The Waking Dead,Game Of Thrones and maybe even Better Call Saul!
5 episode in i give it 8/10
Jonny T.

Posted by Jonnyscultfilms at 01:59 No comments: 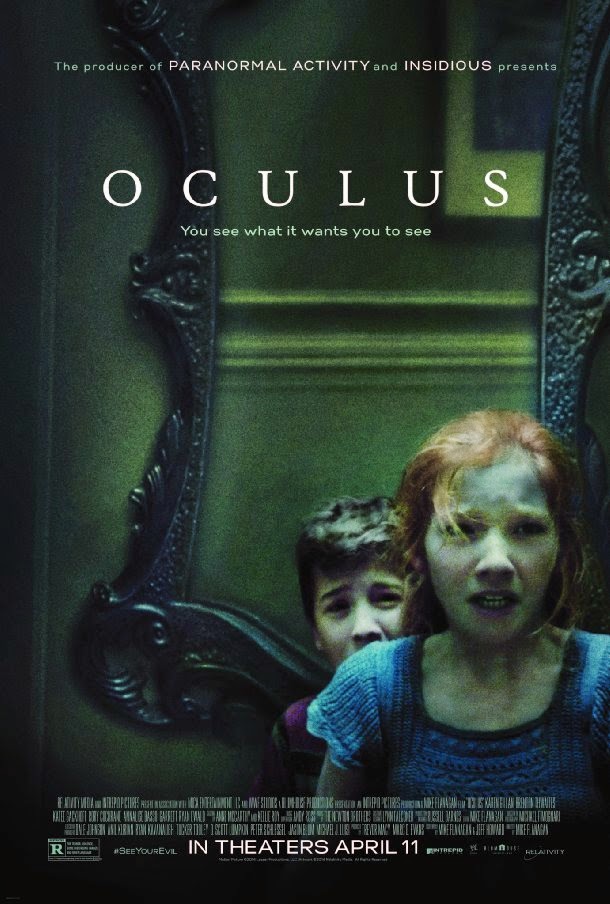 From the Producer of Paranormal Activity and Insidious comes Oculus, Now i can't remember, Was Insidious good and Insidious 2 rubbish? Which Paranormal activity films were good? Was it the Conjuring that was good or was that Sinister?Basically these films now seem to be overtaking the found footage trend, Based on true event ghost stories seem to be the new thing to do.
The basic premise of the story is told in both modern times and flashback, The flashback tells of how two children's mother became possessed by something that was laying within a haunted mirror,The father went loony tune and the small boy protects his sister by shooting his dad. Tales are then told by the boy of ghosts and demons which results in him being locked up in a mental home until one day he is released into the care of his sister.
So after all these years he is finally cured but his sister has big plans for his release, She wants him to return to the house where all the deaths and demons were and film the mirror to prove that there is something inside as well as finally killing what ever lay within the mirror.
At first he totally rejects the idea but she takes him to the house where she has cameras and every sort of paranormal detecting equipment pointed towards the mirror, Night Vision, Timers to check he battery life and change the film within the cameras. The boy through is years of institution has now total disregard for the paranormal but she sets out for that night to prove to him that he wasn't insane.........
Now i didn't dislike Oculus but in saying that i didn't love it either, It seemed a lot weaker and more predictable than the likes of Insidious and The Conjuring, The idea behind it being told in both present day and flashback whilst not original by any means was done rather well, The acting was pretty solid as was the camera work t just seemed for me that there was something lacking, I  felt like i was watching one of the American "My Haunted House" style shows but longer. In saying that you could do a hell of a lot worse, so if you looking for something that's not too heavy this could be for you, A nice easy if predictable and for me not that scary a movie,
5/10
Jonny T.

Posted by Jonnyscultfilms at 02:07 No comments: