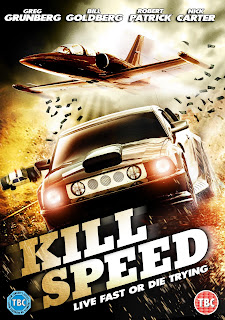 A group of young, speed-freak pilots make a fortune transporting crystal meth across the Mexican border into California in their supersonic, 300mph planes. Chasing the Hollywood lifestyle of girls, parties and stacks of cash, they take ever greater risks.

But when they are asked to fly in their biggest shipment yet, worth $2.7 million, their antics attract the attention of the FBI that wants to use the boys to smash the supplying Mexican cartel. Caught up in a deadly and duplicitous game of cat and mouse the “Flyguyz” are about to run their craziest mission yet.

Kill Speed is a high octane mix of Fast & Furious and Top Gun and speeds onto DVD 31 January 2011.


To celebrate the January 31st DVD release of Kill Speed, we’re giving 3 lucky winners a copy of the high-action film on DVD.
Pre –order your copy of Kill Speed now on HMV


To be in with a chance of winning a copy of Kill Speed, just answer this simple question:

Kill Speed star Goldberg originally made his name doing which of the following?

Email me at jonnyscultfilms@gmail.com by Febuary the 4th for your chance to win,
Good luck,
Jonny t.

Hello All,
Just some recommendations and avoids of some of the stuff i have seen so far this year,i will be doing this on a monthly basis so i hope it helps you all find some good films and avoid some stinkers!
The opinions stated below are mine only and may sometimes be bullshit :-)
1- Black Dynamite.
A fantastic spoof of classic 70's Blaxploitation flicks,one of the very few films that made me cry with laughter,go watch now 9/10.

Ben Affleck in a good film???Yes indeed he is,great heist movie with tension,twists and great action,very well directed and scripted and a great performance from the great man Pete Poslethwaite who will be sadly missed. 8/10
3-Winters Bone.
Oscar touted low budget gritty drama and boy is it grim!When i watched it and it had finished i felt so deflated,but it really is one of those films that sticks under your skin and since viewing me and Emma have had many a discussion about it so there is something there,Just watch it when you are in the right mood! 7/10
4-Despicable me
OK,so its a kids film but what the hell its a very good one at that,super evil villains that want to take over the world and battle against each other,come on whats not to like!Great animation as well. 7/10
5-The yes men fix the world.
Fantastic documentary from a few years back,these guys expose all the corruption within corporate America with some jaw dropping stunts,fantastic and very informative.8/10.
The last exorcism
Well,Finally got to see it and i hated it!To me it was boring,no real scares and oh boy that ending,one of the biggest disappointments for me in a long time 4/10!!!!!
Outcast
New horror from the UK starring James Nesbitt as a demon hunter from Ireland,not great not bad either,good monster and gore though,so if you like low budget horror,give it a try,i thought it was pants 3/10.

Skyline.
Big budget looks from a low budget alien invasion flick,really annoying characters and way too many war of the world rip off bits but its a great turn your brain off Sunday afternooner!7/10
A Town called Panic
Now what can i say about this apart from"Fantastic!!"Plastic toys Indian,cowboy and horse get kidnapped and its french lunacy at its finest and with a running time of around 73mins its perfect. 8/10.
Big river man
A mind blowing documentary from a couple of years back about a guy who decides to swim the entire length of the amazon river to raise awareness of the plight of the rain forests,he does lose his mind at some points and drinks heavily even whilst swimming and is quite large but as the film says"The last true superhero"go watch now!! 8/10
Buried
From the director of"The poughkeepsie tapes"(which does seem buried by the studio!)a tale of a man entombed in a coffin in Iraq is not for the clostraphobic,A very well made film that keeps you guessing what will happen right until the end.7/10.

The usual suspects.
A classic from a few years back,This is only the 2nd time i have seen it and boy do you notice loads more,so if you haven't seen it you must do now and if you have,give it a re-watch,a classic indeed. 9/10
BONUS VIDEO-THE USUAL SUSPECT IN LEGO!!!!
So there you go folks,that's what i have watched so far this year,i will return next month with all of everything else i have watch and please feel free to send me your recommendations to be featured to jonnyscultfilms@gmail.com
Take it easy,
Jonny T.

Posted by Jonnyscultfilms at 01:09 2 comments: 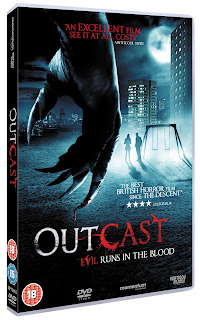 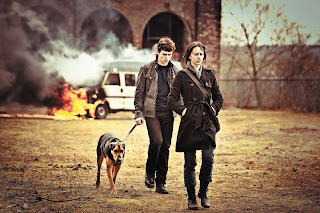 On the run from a deadly pursuer and using an ancient form of magic to hide themselves, Irish travellers Mary (Dickie) and her teenage son, Fergal (Bruton), wind up living in a dingy flat on a run down council estate in the suburbs of Edinburgh. Shortly after arriving, Fergal makes friends with a pretty, feisty neighbour, a Scottish-Romany girl called Petronella (Stanbridge), but it is a relationship which the fiercely protective Mary is determined to prevent from developing – and for very good reason.
Meanwhile, Mary and Fergal’s hunter, Cathal (Nesbitt), a mysterious, terrifying and extremely dangerous man, is closing in. Using his own dark magic to trace his quarry, Cathal’s arrival in the Scottish capital coincides with a spate of brutal murders on the suburban estate. The killings appear to be the work of an inhuman beast and a connection to Cathal soon becomes apparent. What remains to be seen, however, is whether Cathal is responsible for the bloodshed and slaughter or if his mission is to prevent it.
A smart, stylish and original addition to a recent wave of quality British horror movies, Outcast proved to be one of the standout features for horror fans at London’s Film4 FrightFest in 2010. 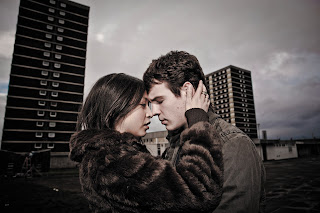 Outcast Review by Jonny T.
Hello Folks,
Just watched the new British horror"Outcast"and i must say its Pretty good!
I wasn't expecting a great deal not having heard a lot about it and when i saw james nesbitt i though"not sure about this"But i was more than pleasantly surprised.
It deals with a boy(Fergal)and his lets say slight obsessive mother on the run from Ireland for reasons that become very clear later in the film,The chosen one James nesbitt is given the powers and authority to hunt them down by way of having his back tattooed with ancient Celtic symbols,The tattooing is done in the old style tap and needle and its a very painful scene to watch!!
I must give out kudos to mr nesbitt as in this he is actually very good indeed,with his long beard and gritty look it works perfectly.
So the hunt begins.....
They are tracked down to a real grim housing estate in Edinburgh and boy is it grim!Then people on the estate start to go missing one by one,you get a brief glimpse of the monster that is doing this with great gore and effect.
I can't really say too much more as the film does have quite a few twists and turns but what i will say is when you do get to see the monster it is very impressive indeed especially for the budget of the film,
So i would give this a definite Recommend!
Jonny T.
Posted by Jonnyscultfilms at 23:42 No comments: 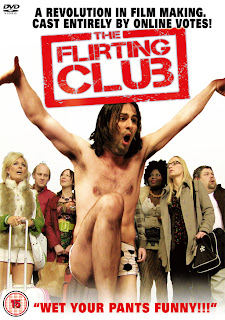 Hello all,
I have kindly been give 3 copies of new hot comedy"The flirting club"To give away,
Email me your answer by January the 31st for you chance to win!
Goooood luck!
Jonny.

To celebrate the January 24th DVD release of British comedy The Flirting Club, we are giving a away a copy of the DVD to 3 lucky winners.
In an industry first, ACADEMY AWARD ® nominee Alex Jovy (Holiday Romance, Sorted) and co-director James Bedford have used ‘the X Factor of the film industry’ to create a classic British comedy - the very first feature film to be cast over the internet.

Jamie, age 29 going on 12, is a loser, a virgin, and has been given a one month ultimatum by his parents: find a girl or marry Laura, ‘the human pig’ from next door. With two left feet, zero pulling skills, a best friend who thinks farting into pint glasses is funny and a schoolboy infatuation with his Hot Boss, Jamie, is all out of options.
Help is at hand, however. An accidental encounter with his local Flirting Club might just hold all the answers.  The group of social misfits meets every week above a pub in order to discover the secrets of love, relationships and finding the perfect partner. The only problem is, these guys need serious help and they're not getting it, any of it.


The Flirting Club is released on DVD on January 24th 2011; pre-order a copy now on http://www.amazon.com/
To be in with a chance of winning just answer this simple question:
In the film, where do members of the Flirting Club meet for their weekly meetings?
Posted by Jonnyscultfilms at 04:23 2 comments: