An Interview with Ian Brooker, Star of The Casebook of Eddie Brewer. 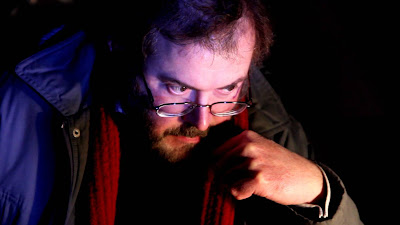 Hi Ian. We met at last year’s Mayhem Horror festival in Nottingham where you were promoting the most excellent The Casebook of Eddie Brewer. It seemed to go down very well Indeed. How did you come to get the role?

IB: In the late summer of 2010 I met up with my friend Sean Connolly in Birmingham City Centre for a coffee and a chat. I had been out of work for a while and was keen to get involved in projects. He mentioned to me that there was a local film that was going to be made that autumn and asked if I would like to be involved. I said that I would. He didn’t say what it was about. Some weeks later I was sent the script written by Andy Spencer. I was delighted that it was about the paranormal – a favourite subject of mine. It was very impressive: well researched, well written with interesting and convincing characters and a disturbing plot. It worked for me: I felt uncomfortable as I read it. I was particularly impressed with the character of Eddie Brewer and wondered who they might have in mind to play the role. I have been fascinated by the subject of the paranormal since I was a teenager and had for a time had been a member of the Society for Psychical Research. Although I had never been involved in investigations, I knew a lot about the subject and knew what worked in film and TV dramas. However, I thought they must have already cast the role. I hadn’t realised that Andy as writer/director and Sean as Casting Director had thought of me for the role all along. However, I held off making the commitment as I was somewhat in two minds as to whether I really wanted to do it. The part was huge. I hadn’t played anything that size on screen before and hadn’t worked to camera for several years. I went away to Norfolk for a holiday and didn’t get back to Sean, who was keen that I make a decision, until my return. Back home, I thought hard and decided that it was a great opportunity and I should take it. So I phoned Sean to say yes.

I see it has yet to have a DVD release but is still getting great worldwide reviews at festivals. Is there any plan on a DVD release yet?

Yes. We are working on producing the DVD extras at the moment. The commentary will be recorded next month. We hope that the DVD and Blu-rays will be ready for release around Halloween 2013.

I see that you have done lots of great voice work: everything from Dr Who to The Archers! What was it like doing the Dr Who ones and is it true that you were the shortest lived Dr Who in History?

From 2001 onwards I recorded about fifty audio dramas on CD for a company called Big Finish which during Doctor Who’s absence from the TV screens kept the flag flying for the Doctor in all his surviving incarnations, and still continues today. I worked with several of the old and new Doctors: Peter Davison, Colin Baker, Paul McGann, and worked with David Tennant on a Dalek Empire series back in 2004 before he became the tenth incarnation. For the fortieth anniversary of the TV series back in 2003, Big Finish devised a series of Doctor Who Unbound dramas featuring actors that fans had always wanted to see (or hear) play the Doctor: such as Geoffrey Bayldon, David Warner and Derek Jacobi etc. At the end of one play called Full Fathom Five, in which David Collings played a particularly unpleasant version of the Time Lord, his assistant shot him dead and he re-generated into me. I had a few lines: “Hello, I’m the Doctor. Who are you?” before she shot me dead. So I lasted ten seconds. I believe that is the shortest lived incarnation ever.

Audio and radio drama has absolutely no limit for the actor who has a wide range of characters – you can play anything, anywhere – on any planet and at any time. It’s wonderful. Pictures are always better on radio.

You have mentioned to me before that you love the  A Ghost Story for Christmas stories. Which one would you say sticks out the most for you?

The Ghost Stories for Christmas were broadcast on Christmas Eve every year from 1971 until 1978. My favourite adaptation is A Warning to the Curious from 1972. It always was my favourite Jamesian story but I loved the adaptation and the use of the North Norfolk coast in the drama. The original story is set in Suffolk but the Norfolk coast around Holkham and Wells-next-the-Sea is a splendidly atmospheric location. It works so well. Peter Vaughan makes an unconventional Paxton but it’s a fascinating performance. The music is particularly effective.

Eddie Brewer had a great old school A Ghost Story for Christmas feel to me, not lots of mindless gore just really good story telling/Direction and acting of course! What do you think of the state of Horror movies today?

It’s all a matter of individual taste and judgement. I am not interested in blood and gore – it doesn’t do it for me - but many horror fans love those films. I like supernatural dramas that don’t show too much, are subtle, nuanced and intelligent and leave plenty to the imagination of the viewer. I’ve recently watched quite a lot of current horror films and have frankly been rather disappointed. I’ve seen some very effective films like The Pact, Absentia, The Innkeepers and Outcast – all well written and acted, but I’ve seen much that didn’t work for me. I think it’s a good rule of thumb that the more you see - the less disturbing a ghost story is. One of the very best ghost story adaptations for the screen was Nigel Kneale’s version of The Woman in Black (Central Films, 1989). It worked so well because of a wonderful script, great performances and a convincing location and community. It has bags of atmosphere and enough shocks to satisfy. And it has one of the most terrifying scenes in all supernatural TV and film drama. You only see the Woman five times but you somehow know that she’s there all the time. Less is definitely more. In the recent Hammer version, the plot is messed about, the performances are hysterical, the community only exists to respond to the haunting, the location is unconvincing and you see the Woman twenty five times – far too much. In my opinion it just doesn’t work. But today horror cinema has to have plenty of jump shocks. It’s counterproductive.

Your body of work really does scan a whole host of fantastic looking projects. What would you say has been your personal highlights of either the projects or the people who you have worked with?

There’s been so much. I have been very lucky to have the chance to work on great projects with really great actors: Peter Jeffrey, Norman Rodway, Philip Madoc, David Warner and Derek Jacobi etc. Personal highlights have been working in Languedoc playing Saint Dominic opposite Brian Blessed as the leader of the Cathars in the Channel Four series Gnostics; working with David Tennant and Celia Imrie in the play Facade for Radio 4; Dr Who: Embrace the Darkness in which I played a huge security system called ROSM and two foot high aliens called Cimmerians opposite Paul McGann’s Doctor; playing Sydney Newman, a Juliet Bravo fan and a Dalek type creature (with ring modulator) opposite a great cast that included Derek Jacobi in Big Finish’s Deadline; playing an old actor, Sir Jack Merivale, in a Doctor Who adventure called Special Features with Peter Davison and James Fleet. And then there is The Casebook of Eddie Brewer – probably the best role I have ever had.

Without me giving spoilers The Casebook of Eddie Brewer left me hanging for more. Is there any plans for a sequel and if so when?

There are plans for a sequel. We are hoping to go into production some time in 2014. I am not saying anything more about it. I’ve left you hanging for more.

The setting for The Casebook of Eddie Brewer in the old mansion was fantastic. Could you tell us how you managed to get to film there and where it was?

Andy Spencer – our director – lives in Erdington and has a long association with Rookery House. I believe he is on the committee for the renovation of the building. It’s a remarkable venue – full of character and atmosphere. It dates from 1725 and was the home in the early Nineteenth Century of the Spooner family. One of the daughters married William Wilberforce.

Have you been able to go to any of the overseas festivals to see The Casebook of Eddie Brewer; and, if so, what was the experience like?

Sadly, I haven’t been able to afford the flights to America. I would have loved to have been at the festivals in person. It would have been very special.

The film is based on Eddie Brewer, an old school paranormal investigator. Now on TV there are a ton of so called reality shows from Most Haunted to Ghost Adventures and Ghost Hunters that use every kind of equipment, but Eddie being old school has none of the Gizmo’s. Was this intentional from the outset?

Yes. The film satirises the Most Haunted series and shows the benefits of experience and sound judgement over sensational and contrived TV happenings.

Do you yourself believe in The Paranormal?

It depends what you mean by “the paranormal”. I believe that people see and hear things that cannot be easily explained. What they see may or may not be hallucinations. My beliefs on the matter have changed. I used to believe in ghosts but now I am not so sure. I do not believe in the survival of a soul or personality after death. I tend more to believe in The Stone Tape theory – that visual or audible hauntings are recordings in stone and earth replaying for the witness. It’s often the case that a witness to an apparition will be on their own and in a semi-dream state: part conscious and part unconscious. Many sightings occur when the witness has just woken up. So the image may be triggered by the unconscious. However, regarding poltergeists, I believe that they exist, but, in my opinion, that has more to do with puberty than demonic possession.

Could you tell us of any future projects you have coming up?

I have just recorded for BBC AudioGo a Doctor Who adventure called Destiny of the Doctor: Shockwave with the Seventh Doctor’s companion, Ace, played by the lovely and very talented Sophie Aldred. It’s an epic.

Any final words for the readers of Jonnys Cult Films?

I think I have run out of words. 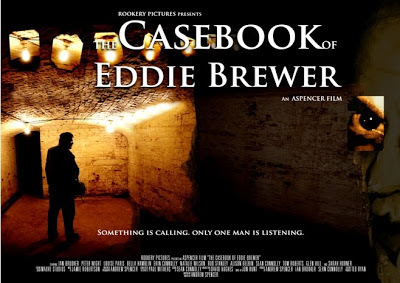 The Casebook of Eddie Brewer will be showing at the Midlands Arts Centre on Thursday 28 Feb.