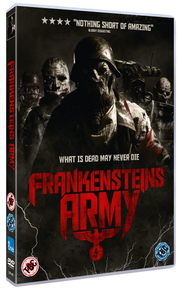 ﻿"Nothing short of amazing" - 4 stars


An insanely suspenseful and sinister game-changer for the Nazi horror genre! With a wealth of teeth-chattering scares and blood-curdling gore, Frankenstein’s Army unearths the true horrors of World War II with an electrifying twist! “Dead Snow” meets “Outpost” by way of “Silent Hill”!

Whilst pushing into eastern Germany toward the end of World War II, Russian soldiers unearth a secret Nazi lab that has begun experimenting with the journal of one Dr. Victor Frankenstein. The scientists have used the legendary Frankenstein's work to assemble an army of super soldiers stitched together from the body parts of their fallen comrades and a disturbing fuse of apparatus and machinery - a desperate Hitler's last ghastly ploy to escape defeat. Frankenstein’s Army is the next generation Nazi horror shocker. Abstaining from the time-honoured traditions of the typical found-footage horror, director Richard Raaphorst delivers a story that is the most fear-inducing and visually conquering horror of its kind since the nerve-jangling “Dead Snow”. With a truly disturbing character design reminiscent of Del Toro, Frankenstein’s Army firmly puts its own remarkable stamp on the horror warfare genre!


“It’s rare that a found-footage horror stands out these days, but Richard Raaphorst's debut does just that.” - SFX