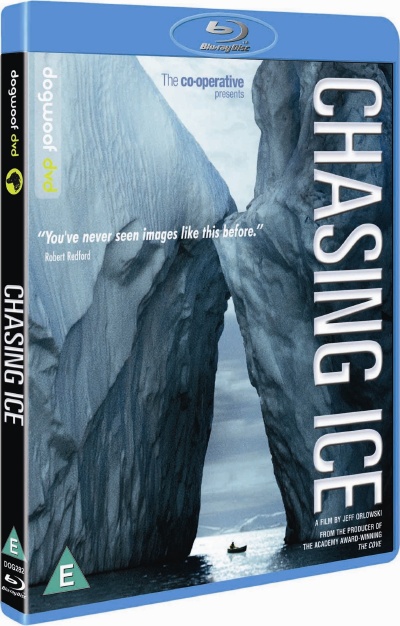 Follow National Geographic photographer James Balog across the Arctic as he deploys time-lapse cameras designed for one purpose: to capture a multi-year record of the world's changing glaciers.

Jonny T here with my review of Chasing ice Blu-Ray from Dogwoof.

This is the 1st Blu-Ray release from Dogwoof and I have to say they could not have chosen a better one! A documentary highlighting the actual facts of the polar ice caps melting. It tells the story of Photographer James Balog, whose portfolio shown throughout the film is superb, highlighting struggles in nature he always takes things to the extremes when it comes to getting the best photographs he possibly can.

This leads on to his interest in the subject of climate change and the myths that surround it, the good thing about it is that he is not a full on believer at first so sets out to see what he can find out what is truly happening and his findings are astonishing and scary at the same time. We get to see various news clips of people saying the whole climate thing change is a load of rubbish, truly one-sided opinionated people that won’t listen to both side of the argument. So he sets out getting sponsorship to do an experiment that will last a year and set up camera’s throughout the worlds glaciers and take daily photographs to do a time lapse of the declining ice, this doesn’t go as smoothly as would have hoped.

The problem it turns out that although the cameras are encased in weather proof cases some of them still succumb to the elements and these particular cameras capture nothing at all, This leads to a very sad scene in which James is reduced to tears as he feels that all his hard work has come to nothing, His real passion for the subject is admirable to say the very least, but all hope is not lost, there are more cameras and some of them miraculously considering the extremes have worked and when you get to see the results it Is breath-taking. 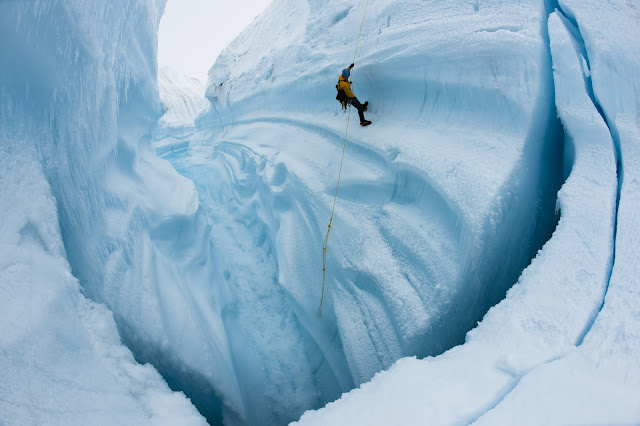 One scene that stood out for me in particular was when after knee surgery James is forced to stay at home and his team is out doing an expedition, They are watching an ice cap the size of Manhattan, yes that’s the size the ice caps can reach and probably even larger, when 17 days in they are on the phone to him telling him nothing is happening and they will give it a few more days then return due to the expeditions budget when suddenly one of them spots something moving, The scene is incredibly well done because all you see is the screen full of the glacier and the voices of those watching, we hear a VERY loud rumble and you can clearly see very small cracks appearing, more crashes and rumbles then something rising from the middle of the glacier that appears like a snow white Godzilla! This is explained that it is finally on the move and the glacier is rising, the stunning thing is the scale, they super impose Manhattan island on what you are seeing and explain that the ice rising is now nearly 600ft high, incredible.

Now I am no climate change expert but I found the whole of Chasing Ice fascinating from start to finish. You see James hanging off and even entering bottomless ice pits to get the best shots he can, some insane looking ice formations and the effects that it is having on the rising waters of the world, The extra’s on the Blu-Ray are equally impressive, It is one of those few documentaries that really does leave you wanting more and I even carried on and continue to follow the work of James and the effects and on-going changes to the glaciers, so I guess it did its job on me!

The Blu-Ray transfer is stunning, the picture quality is crystal clear and the sound rumbles threw you as if you were the one sat on the edge of a Glacier,


Chasing Ice is out on Blu-Ray 10th June From http://dogwoof.com/