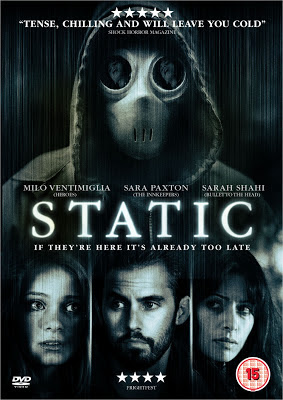 Jonny T here with my review of STATIC,

We then see Jonathan Dade(Milo Ventimiglia)working on his next novel, he had moved to the countryside after the success of his 1st book but since prior events he appears to have constant writers block, He wonders off into the woods and this is where we see the flashbacks of what transpired in the past, he goes to a grave within the woods where the grave stone bears the name Thomas Dade, his dead son, Then he spots his wife sitting along in the woods clutching a small truck that used to be their son’s, obviously she has yet and will she ever get over the death of their boy only time will tell, she sits there with the toy and also a bottle of her medication pills. In the various flashbacks it appears that Thomas is always wet as though he had drowned, the horrific thoughts of the death of their soon never seem to be too far from their minds.

They return home to have dinner in a very quiet setting as though all the atmosphere has now gone from the house and indeed their lives, they eat, Drink, Then Drink some more at which point the wife gets upset and says “why didn’t we do this more often?” and things like why did you move us here and tells him that his scared of being a failure after the success off his 1st novel, The night is over and the reside to bed when in the middle of the they hear a banging on the door, they go down, open the door, there is a girl standing there, Rachael is her name and she asks them if she can come in as she has had blowout on one of her tyres then she heard a clicking noise then saw several men in gas masks so she ran for it, Jonathan the decides to go out and see for himself what is going off, she begs him not to but hey it’s a horror movie so of course he will! 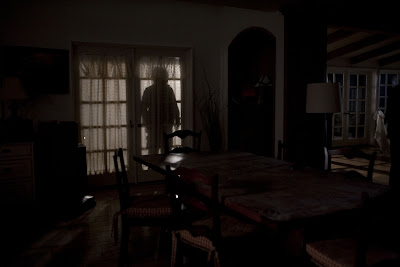 So he goes off into the dark, finds nothing, Meanwhile the two ladies back in the house get talking when Rachael notices Jonathans new book and name on it, so the wife asks if she knows who he is and “of course I do!” she says and asks to look and his new book which the wife refuses to let her do, Rachael then sees a family photograph and picks it up only to drop it resulting in her cutting her hand, At this point Jonathan returns to see the two women one with a blooded hand then goes on to explain that there was nothing out there, or was there?

So that’s the basic set up of Static and to be honest it’s a pretty enjoyable movie, with some twists that you may see coming and you may well not, With most of the movie being shot at night this adds to the atmosphere considerably and although it has a low budget the countryside setting gives up some great locations, so I Rachael involved? Do the men in gas masks actually exist? Have a look folks, it’s not the most original or scary movie I have ever seen but in my opinion the year of horror so far being very weak this year so far this is definitely one of the better ones.

﻿Milo Ventimiglia and Sara Paxton star in the critically acclaimed creepy horror Static which makes its debut on DVD thanks to Second Sight Films. Static is written and directed by Todd Levin in his first feature and will be premiering in the UK on DVD on 15 July 2013 From http://www.secondsightfilms.co.uk/