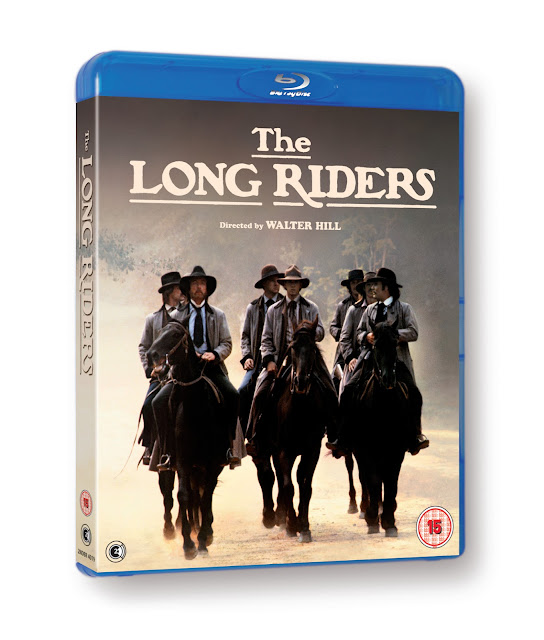 
Jonny T here with my review of The Longriders, So here it finally gets a release on Blu-ray, The little seen Walter Hill western from 1980, Starring brothers Dennis Quaid and Randy Quaid, James Keach and Stacy Keach as well as brothers Keith, David and Robert Carradine it tells the story of Jesses James gang of bank robbers and their ultimate downfall.

The film opens up where we see The Longriders riding across the countryside along to a great soundtrack from Ry Cooder in a slow motion classic Sam Pekinpah style, a style which is also present throughout a lot of the movie, There are in the opening scene 7 of them, maybe a homage to such classics as The Magnificent 7 one of many homages throughout the movie. We are then told that we are now in Missouri after the civil war, This is where the first robbery we see takes place but all goes horribly wrong when gang member Ed Miller (A very young looking Dennis Quaid) shoots an innocent person resulting in a shootout and the shooting of Jessie James, The gang escape and take Jessie with them and regroup near a river and tell Ed Miller he is no longer welcome in the group, The shooting of an innocent is a definite no no in the group ethics and that has now been broken.

Cut to a scene in a brothel, This appears to be their favoured hangout, when the band start playing a song Clell Miller (Randy Quaid) takes an instant dislike to what political subject they are singing about and tells the singer “I am a rebel, change the song” and basically tells him if he doesn’t he will blow his hands off, We then see Cole Younger (David Carradine) at his favourite gambling table when his favourite “Hooker” comes across and he challenges him at cards to drop the price of her services and she beats him, Much to his annoyance. All in all great scene in which you get to see the true characters at their most nastiness, A scene filled with great dialogue that rivals anything a modern day Tarantino film can throw at you!

We then see them on their next robbery outing where Jim Younger (Keith Carradine) poses as a coach driver and drives the coach through woods only to be met and robbed by Jessie and his gang ,Off back they go to the Brothel with another day of robbery done and pockets full of cash, We see the slight softer side of the Gang when Jessie amongst other have dialogue scenes with their ladies who are equally as menacing as them it must be said, Scene culminating in Jessie asking for his ladies hand in marriage and a great gang/Family photo.

The next job the set out to do is one of the biggest yet, The stopping and robbery of a Train as well as robbing everyone on it, this scene is great and involves some brilliant stunt work, you know the type of thing, Horses galloping alongside a speeding train, men jumping off and into open carriages then making their way along the roof jumping from carriage to carriage culminating in them reaching the driver and forcing the train to stop, a brilliant scene.It appears that this is a robbery too far in the eyes of the authorities and poster start going up around several towns offering $5000 dollar rewards for any information on the whereabouts and capture of the James Younger Gang.

This in turn leads to the law going around to See Jesse James mother who it appears lives in a remote shack with her backward 15 year old son, She tells them there is no one apart from those 2 living there, but they don’t believe her and return at night and catch them out, it results in one of the law men throwing a smoke bomb through the window to smoke them out, This goes horribly wrong when it ignites and blows the whole cabin to bits resulting in the death of the young boy. After the funeral it’s full on war, The gang out for revenge and the law out for justice.

So in summing up, it has a Stella cast to say the least, The dialogue is clever/witty, The action scenes especially the last 20 minutes are superbly done, with some great not seen much now stunt work, In my opinion a under seen classic that with this release will hopefully get it the attention it deserves. The transfer is pretty crisp and clean and the great soundtrack booms through, not short on extra’s an all-round great release and a must have for any collection. 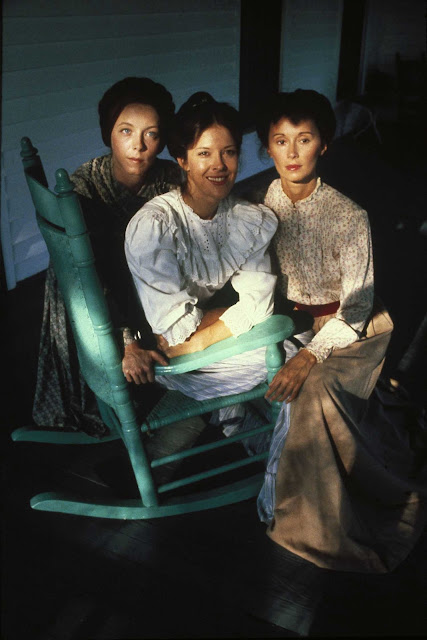 
Legendary director Walter Hill's classic take on the Western, The Long Riders makes its Blu-ray debut courtesy of Second Sight Films. The film follows the exploits of the infamous Jesse James/Cole Younger gang made all the more authentic by Hill's casting of real life brothers David, Keith and Robert Carradine, James and Stacy Keach, Dennis and Randy Quaid, and Christopher and Nicholas Guest.
The Long Riders comes to Blu-ray for the first time along with a fantastic slew of special features on 3 June 2013.